The role of ablation in the treatment of various abnormal heart rhythms has evolved over the last two decades and now has an established place in the management of various arrhythmias, the most common of which is atrial fibrillation. Ablation has the potential to offer a permanent cure and obviate the need for daily anticoagulant and anti-arrhythmic drugs, which reduce the risk of clot formation and try to stabilise the heart rhythm.

An ablation involves passing one or more fine tubes called catheters from the blood vessels in the groin to the heart under local anaesthetic with sedation. Using X-ray and other imaging guidance, the electrical activity within the heart can be precisely located, following which a form of energy, usually cryotherapy (the application of extremely low temperatures) or radiofrequency, is delivered through the catheter to precise points within the heart to cauterise (burn) specific areas and so prevent generation and spread of the abnormal rhythm.

As with all procedures there is a risk of complications, some minor and some serious, which need to be weighed against the perceived benefits from successful treatment. In straightforward cases usually only an overnight stay in hospital is required. Normal heart rhythm is typically restored in about 70% of patients, although this of course depends on how well selected patients are in the first place. Patients with a shorter duration of symptoms and those with a structurally normal heart are more likely to return to normal rhythm. All the same, in approximately 30% of patients the electrical pathways reconnect, necessitating a second, and occasionally a third ablation. However if sinus rhythm can be restored in the long term then blood thinning drugs can ultimately be discontinued in a proportion of patients. 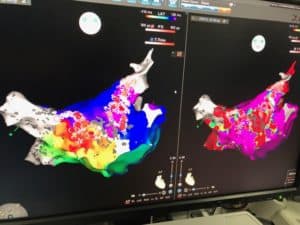 When the atria fibrillate, they no longer contract in a mechanically useful way, causing a degree of stagnation to blood flow and predisposing to clot formation within the chambers. Read more