The mitral valve is a highly complex structure, comprising two leaflets, which acts like a one-way valve between two chambers, the left atrium and left ventricle. The valve can leak, a condition known as mitral regurgitation, due to any number of factors and as the leak progresses it puts a strain on the heart, causing symptoms if left untreated. Conventional treatment, when the leak is severe, is with open heart surgery, either repair of the valve if possible, or replacement with a new prosthetic valve. As with many other treatments for the heart, the role of minimally invasive techniques to reduce the leak is currently under investigation. One such technique is the MitraClip (image of device to the right), which has two arms that are extended across the valve and then withdrawn to capture or clip the mitral valve, so reducing the leak.

The technique involves passing a catheter from the blood vessel in the groin to the heart. It is then carefully passed across the interatrial septum, a thin structure which separates the two upper chambers of the heart, the atria, and is then directed across the leaking mitral valve. The British Heart Foundation has produced a short video demonstrating the procedure, which can be viewed here.

This is a very delicate procedure and is performed under echo and X-ray guidance. Patients may require more than one clip to reduce the leak adequately. Although the results ,are not yet as good as with conventional surgery, the procedure is currently undergoing careful evaluation in clinical trials to determine which patients are most likely to benefit from the new technology, and whether or not it will be available on the NHS in the UK. 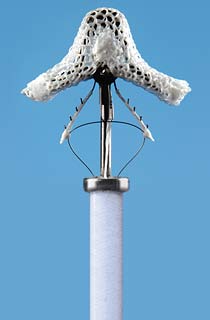 Heart valve surgery has a history dating back more than 60 years and during this time surgical techniques and types of artificial heart valve (known as valve prostheses) have been refined such that with appropriate patient selection, excellent long term outcomes can be reliably achieved. Read more

With the ageing of the general population in Western society we are seeing an ever increasing number of older patients, typically in their 70s, 80s or older, with wear and tear of the main heart valve, the aortic valve. Read more