There is a degree of discord internationally regarding the thresholds for treatment, and the UK guidelines do differ slightly from their European and American counterparts. The latest NICE guidelines recommend that patients with Stage 2 hypertension (readings of 150/95 mmHg or greater) are offered lifestyle advice and drug therapy to lower their blood pressure.

For patients with Stage 1 hypertension (ambulatory or home readings of 135/85 to 149/94 mmHg), lifestyle modification is advised, along with the following recommendations:

Each drug class has a specific mechanism of action; many drugs have additional beneficial effects beyond blood pressure lowering, such that the choice of drug will, in part, be influenced by any other co-existing conditions. For example, a patient who has suffered a previous heart attack would benefit from an ACE inhibitor, ARB and beta blocker, while a patient with angina would benefit from a beta blocker or calcium channel blocker.

Acknowledging that the majority of patients will require more than one drug to achieve adequate blood pressure lowering, the latest European guidelines advocate combination drugs as first-line treatment for most patients with hypertension. Furthermore studies have shown that patients generally have a better response to a combination of two drugs at lower doses, compared with one drug at higher doses, and with fewer side-effects.

An important point of note is that once an effective regime has been established to lower blood pressure it should be continued; if the drugs are stopped the blood pressure will swiftly rise to pre-treatment levels or higher, since these drugs work by suppressing high blood pressure, not curing it.

Anyone with raised blood pressure should also be offered advice about lifestyle changes that can help to lower readings, such as: 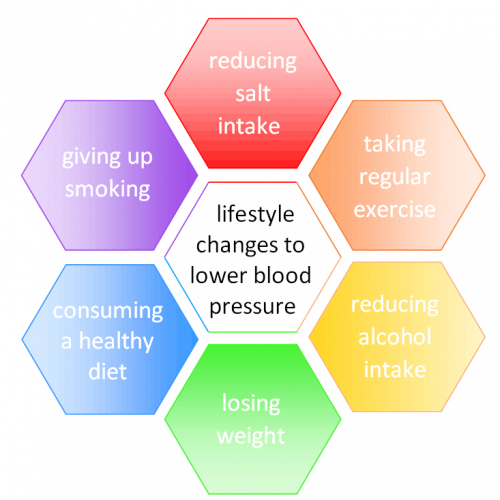 The single most important dietary change one can make in the presence of hypertension is to reduce salt intake, since this has a significant effect on blood pressure. A diet high in salt alters the balance of fluid either side of the blood vessel walls, leading to an increased volume of fluid in the blood, increasing the pressure exerted against the walls of the blood vessels.

A reduction in daily salt intake from 10g to 6g

would result in 2.6 million fewer deaths per year

6g of salt is about one teaspoonful to look at. On nutritional labelling there is often only a figure for sodium rather than salt per se, but the true salt content of a dish is 2.5 times its sodium content, so working from labels alone the goal is a sodium intake of 2.4g or less per day. Thankfully these days many foods have a “traffic light” coding system on the packaging to make it easier to determine which foods to restrict:

Some foods have actually been identified as having blood pressure lowering properties, and indeed in the USA there is a diet known as the DASH diet – Dietary Approaches to Stop Hypertension.

Home blood pressure monitors range in price and functionality, and there is a large selection available, both online and in stores such as pharmacies. Generally speaking arm monitors tend to be more accurate than wrist monitors, but make sure that the cuff fits the arm comfortably otherwise this will affect the readings.The British and Irish Hypertension Society has a list of monitors which have been validated for home use, which you can find by visiting their website – www.bihsoc.org

The target treatment range will depend primarily on your age. To date there have been no randomised controlled trials using purely ABPM or home readings to guide treatment of hypertension, and so the latest NICE recommendations give the same guidance for both: 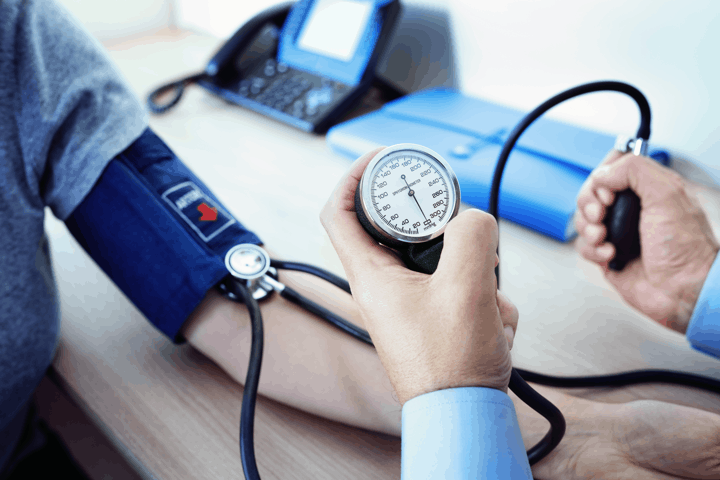 Blood pressure is the pressure exerted on the walls of the arteries when the heart pumps. Read more

An ambulatory blood pressure monitor will obtain a series of blood pressure readings during the monitoring period (usually 24 hours), which will allow the doctor to determine whether a patient’s blood pressure is consistently high enough to require treatment. Read more

Blood and urine tests can be very useful for diagnosing a vast number of conditions, and also for checking that a medication is working properly and not causing any adverse effects on the liver or kidneys. Read more

Resources for patients who are concerned about their blood pressure. Read more