The term “hole in the heart” is used to describe a number of conditions, including patent foramen ovale (PFO), atrial septal defect (ASD) and ventricular septal defect (VSD), all of which are present from birth.

The literal translation of patent foramen ovale is “open oval window”, describing a hole or communication between the right and left sides of the heart, in a structure known as the interatrial septum, which normally separates the left and right atria, the upper chambers of the heart. The foramen ovale is essential during development of the embryo, since the lungs of the foetus are non-functioning at this time and oxygenated blood comes instead from the mother’s circulation; the oxygenated blood returns to the foetus through the placenta and ultimately back to the right side of the heart, passing directly into the left side of the heart through the foramen ovale.

After birth when the baby’s lungs start to function, pressure changes close the hole in approximately 75% of cases, leaving it open in the remainder; in most cases this is of no consequence but occasionally a PFO may cause problems. A minority of strokes, for example, are thought to come from small clots returning from the body to the right side of the heart and, instead of passing to the lungs, which act like a giant tea strainer, they can pass across the PFO to the left side of the heart and then directly into the arterial circulation, and up to the brain (the moving image below shows a contrast echo, or bubble study, with bubbles passing across a PFO).

Similarly, diving to depth causes inert gases such as nitrogen and helium to accumulate within blood and tissues which, upon ascent, particularly if rapid or associated with deep dives, form gas bubbles in the veins, passing to the right side of the heart; if they cross a PFO they can cause neurological symptoms known as decompression sickness.

Lastly, but of contentious nature, the aura of a migraine has been linked to the passage of certain chemicals across a PFO to the brain, bypassing the lungs which would normally inactivate them. Percutaneous closure of a PFO with a device such as the Amplatzer, shown top right, is a therapeutic option in appropriately selected patients.

An atrial septal defect (ASD) is a larger communication between the right and left atria. There are various types of ASD, depending on their precise location, the most common being a secundum ASD. A secundum ASD may not be detected until adult life as the clues from examination are subtle in the early years. Symptoms usually develop when a patient reaches the age of 40 years or more, and include fatigue, breathlessness and palpitations. Closure of an ASD, usually by percutaneous device closure rather than conventional surgery, has a low complication rate; outcome is better in younger patients but most patients benefit from closure irrespective of age. 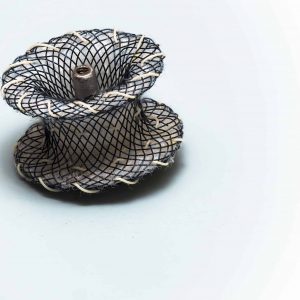 PFO and ASD closure are performed under sedation in a catheter lab using X-rays and echo ultrasound guidance. Read more