The implantable cardioverter-defibrillator (ICD) has added a whole new dimension to the management of dangerous heart rhythms, such as ventricular tachycardia (VT) and ventricular fibrillation (VF), which might otherwise be fatal. Developed in the 1970s, the first device was implanted in 1980 and since then the technology has advanced considerably, with further miniaturisation of the components and greater sophistication of the software (the image to the right shows a modern ICD created by Medtronic).

Superficially it looks rather like a pacemaker, only slightly larger, and the method of implantation is similar, although in some patients a different approach is used, known as subcutaneous ICD implantation. The risks and types of complication are fairly similar. It differs fundamentally from a pacemaker, however, in that it is capable of delivering life-saving treatment to return an otherwise potentially fatal fast heart rhythm to normal; fast heart rhythms, such as ventricular tachycardia are recognised by the ICD, and if they continue beyond a preset time interval the ICD will pace the heart very quickly in an attempt to “recapture” the heart rate and rhythm and return it to normal. A patient may or may not be aware of this changing heart rate. If this fails, an electric shock is delivered, passing between the pacing lead in the right ventricle of the heart and the generator, to restore normal rhythm. The shock, although very brief, is generally noticeable by the patient; some describe it as like being hit in the chest.

An ICD is checked at regular intervals in a pacing clinic with a programmer, which is effectively a specialised computer, and a “wand”, which looks a little like a computer mouse and is placed on the skin over the generator to exchange electronic information. Any abnormal heart rhythms that may have occurred since the previous check will be detected, together with the responses from the ICD, and changes in the set-up of the ICD can be made using the programmer. ICDs can also be set up for remote monitoring, whereby the patient has their own programmer at home which transmits data back to the clinic whenever they are within certain range of the device. This allows the doctor to keep track of any shocks delivered or any abnormal rhythms that occur without the need for the patient to visit them in person.

The battery will gradually deplete over time and this is monitored at routine check-ups to determine when a battery should be replaced; again, this procedure only requires local anaesthetic and sedation.

Life with an ICD carries some restrictions but it will impact on driving; the DVLA has published clear guidelines, which are regularly updated, for both holders of private driving licences and vocational Group 2 licence holders. Patients should also consider the “what if” scenario, in other words the potential impact of a dangerous heart rhythm followed by a shock from an ICD, which may cause loss of consciousness for a few seconds. Patients should never swim alone, for example.

Electromagnetic interference rarely causes problems but, as with pacemakers, it is recommended that patients do not keep a mobile phone in a jacket pocket overlying the generator and that, when using it, it is held to the ear furthest from the generator. Patients will be given a card describing the details of the ICD and should show this at airport security to avoid going through the security gate. Some surgical procedures involve diathermy, which can interfere with ICD function, but this can be prevented by reprogramming the ICD before and after the procedure. Until fairly recently ICDs were a contraindication to having an MRI scan, but with careful supervision in an experienced unit this is now rarely a problem. 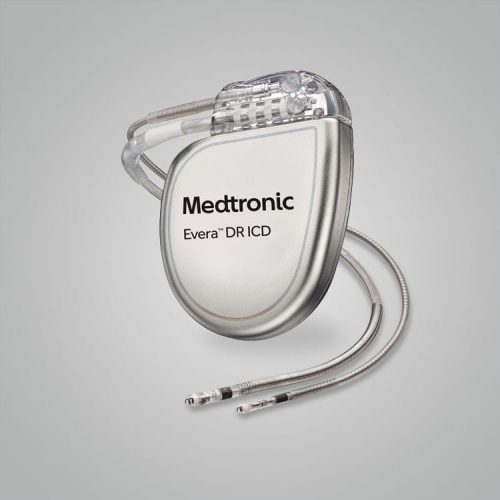 A cardiomyopathy is defined as a disorder in which the heart muscle is structurally and functionally abnormal, in the absence of coronary artery disease, high blood pressure, valve disease and congenital heart disease sufficient to cause the observed abnormality. Read more

Patients with a permanent pacemaker or ICD need to have the device checked at regular intervals to ensure that it is functioning appropriately and to monitor the length of life remaining in the generator. Read more