The first pacemakers were developed in the 1930s and the first use in man was in the 1950s. Back then they were bulky, crude and very limited in function. Since that time there have been truly remarkable innovations in pacemaker technology such that they are now miniaturised, highly sophisticated in function and much easier to implant. A pacemaker, which consists of a generator and one or more pacing leads to the heart, is implanted using local anaesthetic and sedation.

The generator is about the size of a small match box (see below) and is typically placed via a small incision under the skin just below the outer aspect of the collar bone on the front of the chest (typically the left hand side unless the patient is left-handed – see image to the right); it contains the battery to power the device and the software necessary to provide an appropriate heart rate, which will vary from patient to patient. From this, one, two or three leads are passed through the veins to the heart, transmitting impulses to make the heart beat as necessary. The risk of complication is generally small but includes infection, bleeding, puncture of the lung and displacement of a pacing lead. Pacemaker implantation takes between 1 and 2 hours depending on the type of device and complexity of the procedure.

The pacemaker is checked at regular intervals after implantation using a device called a programmer, which looks a little like a laptop computer; this allows interrogation of pacemaker function and the patient’s own heart beat, and assesses the electrical characteristics of the pacing lead(s). The battery life can also be calculated to determine when it should be replaced, typically around every 7 to 10 years, depending on frequency of usage. Pacemakers can also be set up for remote monitoring, whereby the patient has their own programmer at home which transmits data back to the clinic whenever they are within certain range of the device. This allows the doctor to keep track of any abnormal rhythms that occur without the need for the patient to visit them in person.

When permanent pacemakers were first developed they were implanted to prevent excessive slowing of the heart beat which might otherwise cause dizzy spells and blackouts. Over the years their application has broadened greatly and they play a highly important role combined with an implantable cardioverter-defibrillator (ICD) in patients at risk of dangerous heart rhythms and sudden death. Complex software enables the pacemaker to mimic a normal heart beat and alter the heart rate according to the body’s needs, speeding up the heart with activity and slowing at times of rest. A particular type of pacemaker called a biventricular pacemaker, which has two leads pacing the main heart chambers rather than one, can “resynchronise” the pumping action of the heart and improve the function of the heart in selected patients with heart failure.

In recent times we have also seen leadless pacemakers come to market. These devices are more than 90% smaller than traditional devices and also have a longer battery life. Leadless pacemakers are implanted by making an incision in the groin and using a catheter to position the device in the right ventricle. At the moment these devices are only suitable for patients who require single chamber pacing but the benefits over traditional pacemakers include the lack of a scar over the chest wall, a decreased risk of infection, and no risk of lead failure.

A patient should be able to lead a fairly normal life with a pacemaker, although contact sports which might damage the generator and strong magnetic fields should be avoided. Patients should not drive during the first week following pacemaker implantation and more detailed information in this regard is available via the DVLA. Patients will be given a card describing the type of pacemaker they have and other details; when travelling this should be shown at airport security to avoid going through the security gate. Some surgical procedures involve diathermy, which can interfere with pacemaker function, but this can be prevented by reprogramming the pacemaker before and after the procedure. 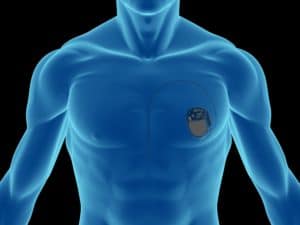 Patients with a permanent pacemaker or ICD need to have the device checked at regular intervals to ensure that it is functioning appropriately and to monitor the length of life remaining in the generator. Read more