Blood and urine tests can be very useful for diagnosing a vast number of conditions, and also for checking that a medication is working properly and not causing any adverse effects on the liver or kidneys. A standard blood and urine profile will often check a number of different parameters, and those most commonly tested by a cardiologist are described below:

A full blood count (FBC) looks at the number of red blood cells, white blood cells and platelets in the blood, together with other indices such as the amount of haemoglobin, a low level of which indicates anaemia. It is a broad screen that will give the doctor information about the patient’s general health and presence of any infection.

The ESR (or erythrocyte sedimentation rate) is a test which looks for inflammation in the body. It is considered to be a non-specific test since it does not tell the doctor where the inflammation is or what might be causing it, but a raised ESR can be a sign of infection, which may require further investigation.

Urea, electrolytes (sodium and potassium) and creatinine (collectively referred to as “U&Es”) are tested to assess how well the kidneys are functioning; abnormally high or low levels of these in the blood suggest that the kidneys are not filtering the blood as effectively as they should be. Certain medications such as some of those used to control blood pressure can affect the kidneys and so a patient may require regular blood tests whilst taking these medicines to ensure that the kidneys are not being put under any undue strain.

Liver function tests (LFT) are used to detect liver damage or disease. In standard liver function tests the levels of bilirubin and liver enzymes, AST and ALT, are measured. Some medications such as statins can occasionally cause liver dysfunction and so a doctor may want to keep an eye on a patient’s liver function tests during treatment to make sure that it is not being adversely affected.

Creatine kinase (CK) is a muscle enzyme, the levels of which rise if muscle cells are injured, for example during a heart attack. Some medications such as statins can cause muscle ache and can therefore cause levels of CK to rise, as can high levels of strenuous exercise in the days before the blood is taken.

C-reactive protein (CRP) is a test used to identify inflammation and infection. Like the ESR (see above), a high CRP level is non-specific as it does not tell the doctor where the inflammation is, but it can be an indicator that further investigation is necessary.

The highly sensitive CRP test (hsCRP) is used as a predictor of risk of developing heart disease. It is thought that the build up of atheroma in the arteries is an inflammatory process but occurring at a low level over a long period of time. An elevated highly-sensitive CRP result may indicate that this process is taking place and that further investigation into the coronary arteries may be warranted.

High levels of uric acid in the blood can cause crystals to form in the joints, which can lead to joint inflammation and gout. Uric acid may also cause stones to form in the kidneys, and so it important to monitor this to prevent problems from occurring.

A doctor may ask for an extended lipid profile to be undertaken in a patient who is considered to be particularly high risk for a cardiovascular event such as a heart attack or stroke. This profile will look at a broader spectrum of indices than the standard lipid profile, which may help in risk stratification and guide appropriate treatment.

Blood glucose (sugar) testing is often carried out as a screen for diabetes, since this condition often has no symptoms in the early stages but nonetheless requires treatment.

The haemoglobin A1c (HbA1c) is used to assess a diabetic’s glucose control over a period of time, to ensure that blood sugar levels are being kept as close to normal as possible.

Cardiac enzymes (troponin, CK-MB and myoglobin) are released into the blood when the heart is damaged, and so raised levels of these are indicative of a recent heart attack or acute coronary syndrome.

The INR test (International Normalised Ratio) tells a doctor if the amount of warfarin a patient is taking is correct, too high or too low. Patients taking warfarin need to keep careful control of their INR to ensure it stays within the therapeutic range to prevent blood clots forming, but not unduly increase the patient’s risk of bleeding.

The NT-proBNP test looks at how efficiently the heart is working and is used to diagnose the presence of, or grade the severity of, heart failure.

Blood cultures are used to detect the presence of bacteria in the blood. Three or more cultures are usually collected in a series of samples, which are then observed for growth. If a culture is positive for growth, microbiologists can identify which antibiotics the bacteria are sensitive and resistant to, so that the most appropriate drug is given to the patient.

A urinary albumin/creatinine ratio (UACR) is used to detect early kidney damage or disease; high levels of protein in the urine indicate that the kidneys are not working as effectively as they should be.

Urine culture is used to detect a urinary tract infection.

Patients with symptoms such as persistent high blood pressure or severe headache may be asked to perform a 24 hour urine collection to rule out excess production of adrenaline and noradrenaline. 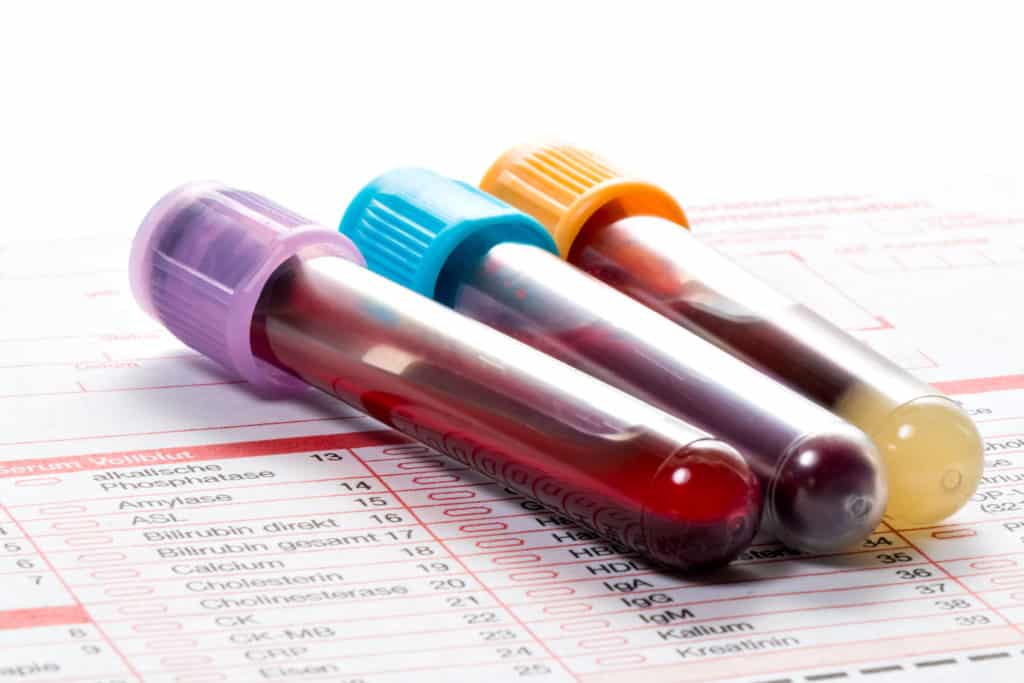