There are a number of different ways of assessing the autonomic nervous system, and patients are often asked to undergo a series of core tests, as below:

For a tilt test the patient lies flat on a table, and after 10-15 minutes of lying horizontally, the table is gradually tilted, raising the head up to 60° to simulate a change in posture from sitting to standing. The table remains upright for up to 45 minutes, during which time changes in heart rate and blood pressure are recorded to assess the body’s cardiovascular response to postural changes.

Before the start of the test a number of small sticky patches (electrodes) are attached to the chest, arms and legs so that the heart rate and rhythm can be recorded throughout. A device such as the Finapres, which consists of tiny cuff attached to the finger and a larger cuff attached to the wrist or upper arm, is fitted to enable beat-to-beat blood pressure to be monitored during the test. Two safety belts are also fitted over the patient, one at waist and the other at knee level, so that the patient does not slip from the table during testing.

Patients are generally asked to fast for four hours prior to testing, and to avoid alcohol and heavy exercise for 12 hours before. The patient can return to normal duties once the test is complete.

Some patients develop symptoms of dizziness, palpitations, nausea or faintness during the test. The test can be terminated at any time if a patient starts to feel unwell, and symptoms usually resolve swiftly after returning to a horizontal position.

The liquid meal generally consists either of Complan (a nutritional supplement usually given to people who struggle to maintain a high enough weight during a prolonged period of illness) with glucose and milk, or for patients who are lactose intolerant, a mixture of glucose and water.

To start with the patient will have a standard tilt table test, as described above. They will then be asked to rest for a short period of time, prior to drinking the liquid meal whilst lying flat. They must then lie still and quietly for 45 minutes, following which the tilt test is then repeated.

A modified exercise test looks at the effect of exercise on blood pressure and heart rate. It can also help to determine if any symptoms are linked to exercise. Unlike a standard exercise test, which usually involves fast walking on a treadmill or stationary cycling against an increasing level of resistance, a modified exercise test is undertaken lying flat. The patient will be asked to lie and stand for short periods of time before commencing the test to set baselines for blood pressure and heart rate, then lie flat and use an adapted cycling machine to cycle at a continuous speed with increasing levels of resistance. The patient is encouraged to exercise to their maximum ability during the test, and then to rest quietly afterwards for a period of time, during which heart rate and blood pressure continue to be monitored.

Adrenaline, noradrenaline and dopamine are collectively known as catecholamines, and these hormones have a role in regulating blood pressure and heart rate. The levels of these change with movement from lying to standing and so blood samples will usually be taken after a 10 minute period of lying flat, and then again whilst in the standing position on a tilt table. Certain foods and drinks can affect the test results and so patients are asked to avoid all caffeinated food and drink, bananas, citrus fruits and vanilla for 48 hours prior to testing.

Measuring the blood pressure and heart rate at set intervals over a 24 hour period is an effective way for a doctor to gain an understanding of a patient’s overall profile, how it changes throughout the day and determine whether any symptoms are related to increases or decreases in heart rate and blood pressure.

A blood pressure cuff will be fitted to the non-dominant arm, and a cable will connect this to a portable recorder worn on a belt around the waist. The monitor is programmed to take the blood pressure two or three times an hour during the daytime, and once an hour at night. When the cuff inflates, the patient should straighten the arm and try to remain as still as possible until the reading is complete.

Patients are asked to go about all their daily activities as usual, with the exception of swimming, bathing and showering, until the 24 hour period has come to an end (care should be taken to avoid getting the equipment wet). Patients are asked to keep a note of any significant activities undertaken or symptoms experienced during the monitoring period, so that any relationship between these and the blood pressure can be identified. It is also useful for the patient to note exactly when they went to bed and got up, so that accurate day and night time profiles can be generated. 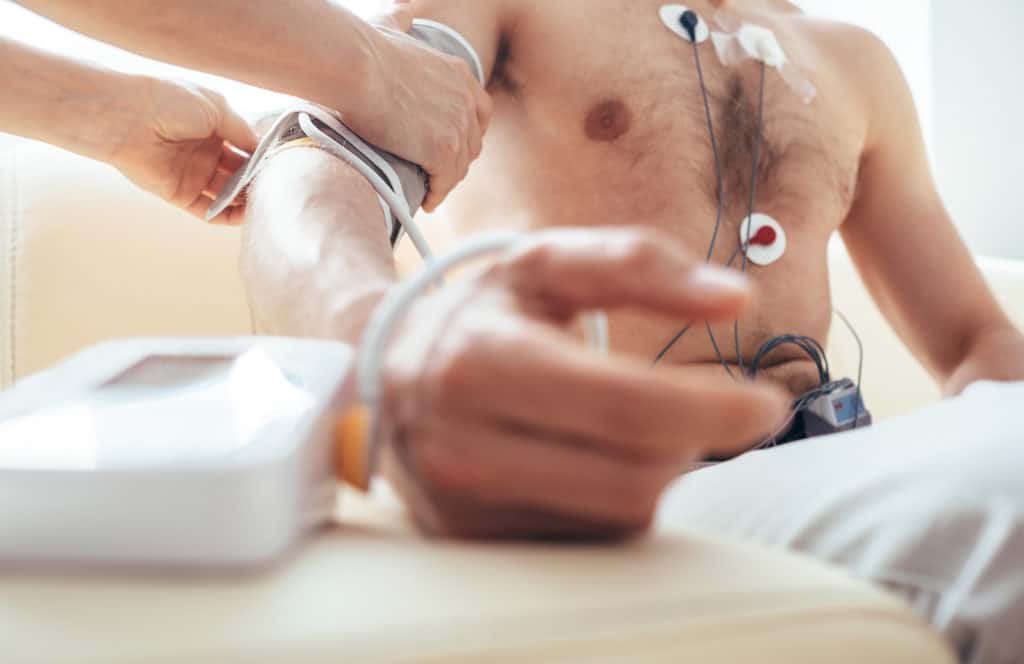 PoTS is a condition which affects the autonomic nervous system, the system responsible for regulating the involuntary processes which take place in the body such as breathing and digestion. Read more

An ambulatory blood pressure monitor will obtain a series of blood pressure readings during the monitoring period (usually 24 hours), which will allow the doctor to determine whether a patient’s blood pressure is consistently high enough to require treatment. Read more

Resources for patients with PoTS and related conditions. Read more