Some patients with atrial fibrillation have a particularly high risk of stroke but also a significant risk of bleeding, for example where there is a history of a prior bleed in the bowel or brain, recurrent and severe nose bleeds, and in blood and liver disorders. This unsatisfactory and potentially dangerous position had to be accepted until the more recent development of mechanical devices which can block off the left atrial appendage (LAA), the most common site of clot formation, and so markedly reduce the risk of embolic stroke.

The most studied device is the WATCHMAN, which can be inserted via keyhole surgery into the heart. The WATCHMAN device is a self-expanding frame structure with tiny barbs to help anchor it in position and a permeable polyester fabric that covers the atrial facing surface of the device. The device is preloaded within a delivery catheter, which is passed from the femoral vein at the top of the leg to the heart and then across the interatrial septum, which separates the right and left atria, and positioned in the left atrial appendage where it is deployed and the catheter removed. The procedure takes about one hour and is undertaken under local anaesthesia with conscious sedation or general anaesthesia. Patients can usually expect to be discharged the following day in most cases. Boston Scientific, who created the WATCHMAN device have produced a short video demonstrating the procedure, which can be viewed here.

Studies of the WATCHMAN device have been encouraging and more techniques working along these lines are in development. The latest analysis of the PROTECT-AF trial comparing the WATCHMAN device to warfarin showed that it is certainly a viable alternative in patients who cannot take anticoagulants. 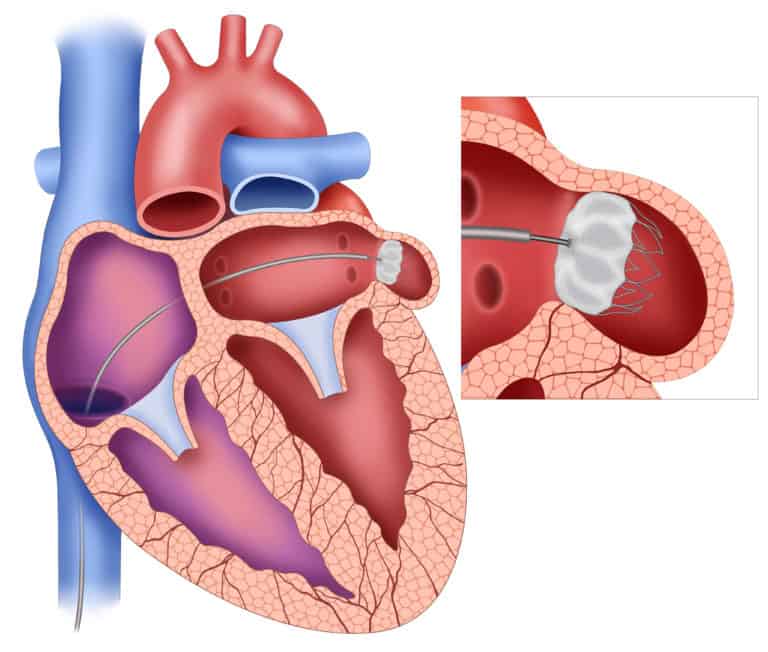 When the atria fibrillate, they no longer contract in a mechanically useful way, causing a degree of stagnation to blood flow and predisposing to clot formation within the chambers, and in particular within a finger-like projection called the left atrial appendage. Read more