Energy drinks were first developed by a pharmaceutical company in Japan in 1962 to keep their staff alert and thereby facilitate longer working hours. An Austrian businessman on a trip to Asia in the 1980s realised that there was a gap in the European market for similar products and promptly established the company Red Bull, which remains the market leader to date.  Worldwide sales of energy drinks are thought to be in the region of 12 billion US dollars per year, but in recent times questions have been raised about the safety of these beverages, with links having been made to medical conditions as serious as heart attacks and even death in both one-off and regular consumers.

Energy drinks are so called because they are intended to deliver an extra jolt of energy, and this generally comes in the form of sugar and caffeine. They are also known to contain a number of other ingredients such as ephedrine, a central nervous system stimulant also found in weight loss products; taurine, an amino acid involved in a number of biological processes; ginseng, a plant root thought to have energy boosting properties; B vitamins, which help to convert sugar to energy, and a host of other additives and flavourings.

The short and long term effects of the combination of ingredients in energy drinks is relatively unknown, but it is the high caffeine content of these beverages which is the biggest cause for concern. Caffeine blocks the effects of adenosine, a chemical in the body which helps to promote sleep. When adenosine is blocked the body goes in to “flight or flight” mode, which triggers the release of adrenaline, in turn causing an increase in heart rate and prompting the liver to release extra sugar into the bloodstream for energy. Prolonged exposure to this sugar over time predisposes to type 2 diabetes, which has serious implications for health including an increased risk of heart disease, kidney disease and blindness.

In small doses caffeine can cause heightened alertness, decreased appetite, increased urination and difficulty sleeping. In higher doses it can cause palpitations, high blood pressure and overstimulation of the central nervous system. High caffeine consumption in pregnant women has been linked to a greater risk of late miscarriage, stillbirth and low infant birth weight. Caffeine overdose can cause convulsions and death, and this is a particular risk for those who consume energy drinks when exercising, since the increased sweating from activity combined with the diuretic effect of caffeine can cause acute dehydration.

71% of young adults who consume energy drinks mix them with alcohol, which can lead to a host of other problems. The combination of a high amount of caffeine with alcohol leads to state of “wide awake drunkenness” where a person may be showing all the physical signs of intoxication, but have a false sense of soberness and is therefore likely to continue drinking and/or partake in high risk behaviour such as driving under the influence of alcohol, fighting, having unprotected sex and taking illicit drugs.

So, how much is too much? The answer to this question depends in part on where you live, as many countries now have laws in place dictating the maximum amount of caffeine that can be added to energy drinks. In France, Denmark and Norway, Red Bull is actually a banned substance since it exceeds these limits, and in Sweden energy drinks can only be purchased in a pharmacy. In many countries the sale of such drinks to under 16s is banned, and many now carry a health warning for pregnant women. The European Food Safety Authority’s recommendations are that adults consume no more than 400 mg of caffeine per day, pregnant women do not consume more than 200 mg per day, those aged 13 to 18 have no more than 100 mg per day, and children aged 12 and under do not consume more than 3 mg of caffeine per kilo of body weight, which essentially means that the amount found in the occasional chocolate bar or fizzy drink is unlikely to do any harm.

To help you to stick within the guidelines, the table below gives the caffeine contents of the most popular energy drinks on the market at the moment. The volumes are in US quantities but for ease of reference 12 oz is roughly equivalent to our standard 330 ml can, and 20 oz is just over half a litre. 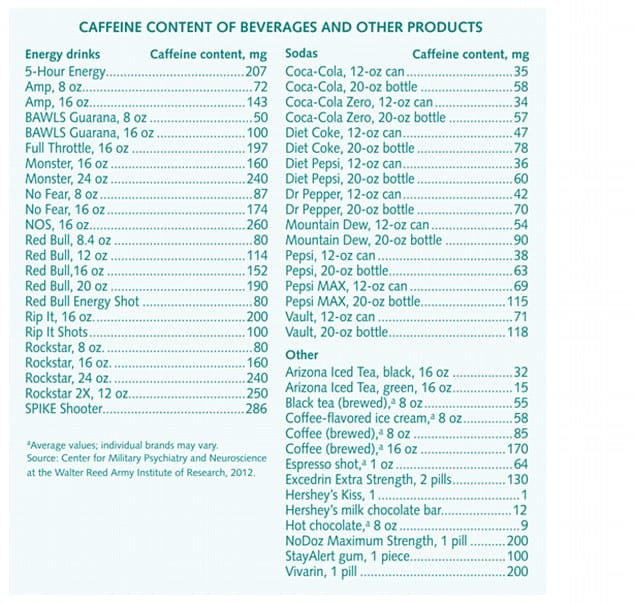 PrevPreviousCoffee and the cardiovascular system
NextA bitter pill to swallow?Next